My New Book about Gettysburg 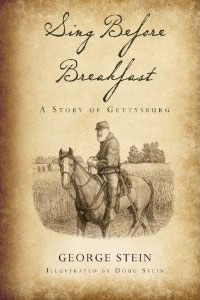 Sing Before Breakfast is a new book now available through Amazon.com.  It tells the tale of a twelve-year-old farm boy, Reis Bramble, who is caught up in the Battle of Gettysburg and spends four days with the Union Army.  Because he has extensive knowledge of the roads and streams around Gettysburg, General George Gordon Meade takes hm under his wing to serve as a "scout."

Reis finds that this thrilling proposition is soon replaced by the battlefield horrors that he cannot reconcile with those tenets he has been raised to believe are essential to good character.
Posted by George Stein at 10:15 AM